BE A MAWALA
Tanhaji-The Lion Maratha Warrior is a free game made as a tribute to the warrior Tanhaji Malusare, and dedicated to the great Warrior King “Chhatrapati Shivaji Maharaj”.
Chattrapati was the founder of hindavi Swarajya.
Many Maratha soldier has given their life to build the Maratha Empire, Tanhaji was one of them.

FREE TO PLAY ON MOBILE
Tanhaji game is one of the best free mobile fighting games you will ever play. It offers a simulation-like experience of a Warrior’s life.
In this game, you have to go on an epic adventure to capture Kondhana fort for Chhatrapati Shivaji Maharaj. you have to defeat all the Mughals, coming in your way using your sword and fight for your survival. You can also take advantage of the open-world environment to defeat your enemies.
This game is based on the Maratha war strategies.
Tanhaji game is just like other Chhatrapati Shivaji Maharaj games available on play store but This is the first 3d Indian war game ever.
Tanhaji Game will spread awareness about the history of Maratha warrior Tanhaji.
This is one of the best ever story-based action games in the history of Maratha’s.

BRIEF HISTORY-
Born on 19th Feb 1630, Shivaji maharaja dreamed about the ‘Swarajya’ – Kingdom of Marathas with the help of childhood buddies like Netaji Palkar, Yesaji kank, Bahirji naik, Tanaji malusare . Surrounded by Qutubshah in south, Adilshah in the east, Portuguese in the west, and Mughals in the north, It was very difficult for Shivaji to form his own empire as he has to fight wars every now and then against many enemies. His plan was to fight gorilla warfare with his opponents and for that forts played quite an important role. He started winning forts at the early age of 14 around Pune area.
But there was a time in 1665 when Mirza Raje Jay sigh came with hefty army of 80000 soldiers. Shivaji knew this was the time for truce as a war strategy. He had to give up 23 of his forts to Mughals with 4 lack gold coins. Out of 23 forts few were very important for Maratha dynasty. One such fort was Kondhana near Pune.
Shivaji Maharaj deceived Aurangzeb and came back from Agra to Pune in 1666. He started winning back his forts one by one. Kondhana was one such strategically important fort. But it was very difficult to conquer. Out of many of his potential colleagues and soldiers there was Tanaji, he knew a lot about this fort.
In 1670 feb, Tanaji was planning Marriage of his Son, When Shivaji Maharaj called him and asked him to fight a battle against Mughal Subhedhar Udaybhan who was commanding the great Kondhana. The great Tanaji postponed the marriage of his beloved son and decided to win back Kondhana for the great Shivaji Maharaj.
In a very dry and cold night Tanaji attacked Kondhana from the west side, Which was the toughest side to climb the fort.
Tanhaji game is developed to let people know about the Indian Maratha culture.

GAMEPLAY –
This is the first action Role Playing Game on Maratha Warrior and Maharashtrian Culture. This game is all about winning the fort Kondhana back using strategy and skill. In this game, you become Tanhaji the Lion Maratha Warrior. Try winning the Great fort using your sword to kill enemy soldiers. Fight a bloody war against the Mughal subhedhar Udaybhan and his right hand – Siddhi Hilal.

LEVELS –
There are 12 Levels of the game and in each level, as the Character hero Tanhaji achieves a new height of bravery Game would award a new Rank to his Name. In this way, he would start from Rank Mawala to raise through Sarnaubat. These were the real Ranks in Maratha Infantry during the Era of great Shivaji Maharaj.
Download this game In the Memory of the Tanaji who lost his life for the Victory of Martha on Feb 4th, 1670!

IN-APP PURCHASE –
There are many things for purchase and that makes this fun game more attractive. 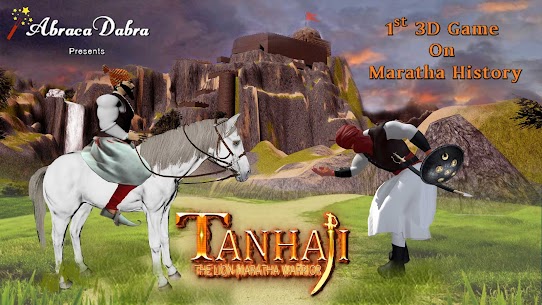 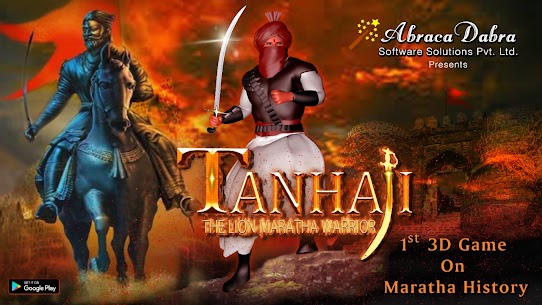